Tune in to Episode 55 with Treyous Jarrells a former CSU-Fort Collins running back and cannabis entrepreneur discussing the benefits of cannabinoids and CBD for athletes. Treyous is a strong proponent of utilizing plant medicine over prescription medication on and off the field and has now committed his life after football to talking to the industry about its benefits. Treyous is the co-founder of CannaEndorsers and Motives Made Just 4 Athletes. 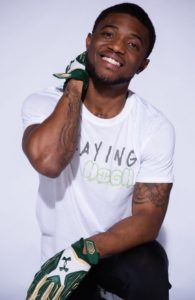 Treyous Jarrells, a former standout running back from Colorado State University, is experiencing a journey that many would describe as unpredictable. In 2015, the unanticipated transition took place….

As a high recruited athlete, Treyous was looked upon as a vital piece to help a football program succeed in their NCAA conference. When it was time for Treyous to decide on where to take his talents, Colorado sat at the top of his list. It’s common to have athletes choose programs where they know their skills will develop and receive a lot of playing time. But, Treyous knew that he could get that plus more; The Centennial State legalized Cannabis for medical and recreational use.

His use of Cannabis wasn’t for recreational reasons; it was used to help relieve the chronic pain from playing football. During the course of his career at Colorado State, Treyous competed under the influence in every game but one. Afraid of failing a drug test and losing his football scholarship, the five star athlete had to make the most important decision of his life.

Treyous expertise has given him the opportunity to educate the sports community on how utilizing Cannabinoids can potentially benefit an athlete’s health. His road to breaking down barriers is promising as he has been invited to speak on panels, nominated for awards within the Cannabis Industry as well as being recognized as the 1st industry consultant to implement CBD into professional sports in 2018.