Tune in to Episode 57 with Joel Haas, comedian and sound production guru who has taken his career to a new level offering High Speed Dining. HSD is a dumbed down fine dining experience where Joel tackles over 500 restaurants across the country stoned. He is currently on a 420 coast to coast tour where he recently made a stop in Denver, CO and had a chance to talk to Lit & Lucid at The International Church of Cannabis about his high speed dining experience and how he got to where he is today. Joel also produces a HSD podcast where you can follow his travels and dining experiences as well as produces hundreds of ringtones available on iTunes. 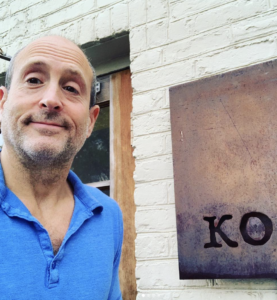 Joel has spent a lifetime in Comedy Radio including 8 amazing years at XM Satellite Radio as the creator of Nationwide Uncensored Comedy Radio. He had the pleasure to be the Comedy Director and a DJ for XM Comedy, one of the networks top channels. On the side he recorded hundreds of comedians and produced hundreds of comedy albums.

Joel left XM in 2009 when they merged with Sirius to create SiriusXM. Since then he’s had tremendous success with original comedy ringtones and his label Hahaas Comedy. He’s done well on the Comedy Ringtone Charts in iTunes. Joel also consulted Pandora as they created their Comedy Channels.

He’s had a wonderful career in the funny business and now he’s brought that experience, creativity and sense of humor to you with High Speed Dining. Tune in to watch Joel get high on legal recreational marijuana and eat at the best Fine Dining restaurants in the World (where recreational marijuana is legal!)