In 2014, Mike attended his first cannabis conference, it was in that moment that he realized many of the skillsets he had acquired as the President of United Natural Foods (UNFI) could be replicated in the cannabis industry. From that day on Mike focused all of his attention on the new industry founding HERBL in 2018, which is now California’s largest cannabis distributor and supply chain management company.

Tune in to E.129 as we discuss the future of supply chain management and distribution in the cannabis industry.

Mike educated us on the parallels between the natural food and cannabis industry, as well as key features that allows HERBL to service 98% of California’s storefronts. We talk about their recent partnership with Cookies, and what HERBL was offering that could help a large brand become even more successful. We finish up the episode discussing alcohol regulations and how some of those policies could transfer over to the cannabis industry as we start to look towards federal legalization.

If you are interested in learning about a very imperative piece to the cannabis industry’s puzzle this episode is for you! We really learned a lot from Mike and hope you do too. 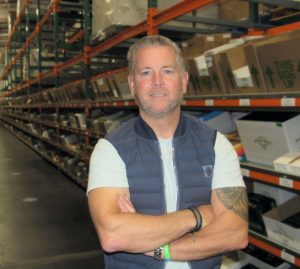 Mike Beaudry is founder and CEO of HERBL, California’s largest cannabis distributor and supply chain solutions company servicing more than 850 storefront and non-storefront retail licensees. Under his leadership, HERBL brings outstanding people, processes, and technology together to create a powerful supply chain never before seen in the cannabis industry.

Mike has over 25 years of experience leading high-volume distribution companies and held several executive roles in the natural & organic products industry. Mike led the national operations and then spent more than five years as President of United Natural Foods (UNFI), America’s leading distributor of natural, organic and specialty foods. As president, he rapidly scaled UNFI from a regional company with with $700 million in sales to a national company with $5 billion+ in the books.

After more than a decade at UNFI Mike spent five years as CEO of Lang Pharma Nutrition, a private label dietary supplement company which manufactures and distributes products for the top retailers in the U.S., including Costco, Walmart, CVS, and Target.

Mike began researching the California legal cannabis industry in 2014 and relocated from Rhode Island to California in January 2016 to focus 100% of his efforts on cannabis. In November 2014 he walked the floor of a cannabis conference and harked back to his roots in natural foods, immediately struck by the similarities: lots of small brands with people passionate about their product. Just as with organic and natural foods, the cannabis show was lined with long-time believers telling their story, relentlessly encouraging others to discover the plant. Today’s multi-billion natural food industry was similarly founded on the backs of artisanal brands, each with their own unique story, yet with a communal mission to bring their goods to market for others who may want and need them.

After a two-year journey to learn all he could about California’s industry and beyond, Mike formally launched HERBL in 2018. Since, HERBL has built a tremendous team to bridge the pioneers and craftsmen with those that can bring their product to the end consumer.