Tune in to Episode 92 featuring Edward Weidenfeld, CEO and Co-Founder of District Cannabis in Washington, D.C and Phyto Management LLC. Edward is battling Parkinson’s Disease and has found much relief and comfort in the cannabis plant. Weidenfeld has over 30 years of experience on Capitol Hill as the former Head Counsel to Ronald Reagan and an advisor to five additional Presidents. Edward shares great insight into the politics surrounding cannabis, why he became an advocate for the plant, and what District Cannabis is doing to be a strong steward offering clean cannabis production for cannabis patients.

Please take the time to listen to Edward’s inspiring story, it is because of people like him that Lit & Lucid Podcast was created to help important voices like Edward’s be heard. 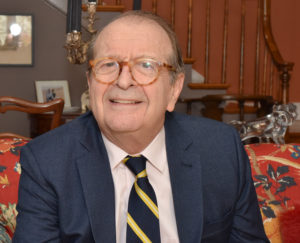 “On a personal level, I determined this was a choice to do good.” Those words were uttered a couple of years ago by Edward Weidenfeld, a leading CEO and advocate of District Cannabis, after he was struck with Parkinson’s disease. The condition, which acts insidiously on both the body and the mind, compelled Edward to venture outside of conventional medicine in a desperate effort to find some solace. It was through that effort that Edward discovered the benefits of cannabis firsthand and his conclusions were more than a mere revelation, rather, they led to a total transformation.

As former head counsel to Ronald Reagan, not to mention an advisor to five additional presidents, Ed was unable to participate in cannabis due to the vital security clearances he held not to mention his overall profile. Simply put, his affection for cannabis and all that it came to embody was so inspiring that it moved him to depart his work with the Dept. of Defense and, importantly, shift away from his prolific legal career in pursuit of a higher calling.

In 2016, Edward founded District Cannabis and soon became the face of cannabis reform in Washington D.C/Maryland. The brand was enjoyed an unrivaled popularity in the region and the company has since expanded into Maryland and is posed for additional growth both regionally and nationally. In point of fact, the company has since launched the largest indoor grow operation in the State of Maryland and is poised to expand that footprint in the coming years.