Tune in to the final episode of our HomeGrown Series: Made in Colorado. On Episode 159 we are chatting with Chris Chiari, CEO of 420 Hotels and Owner of the Patterson Inn. The 420 Hotels just became the first hospitality business in the country to receive a provisional license allowing it to operate a cannabis consumption lounge as an amenity to its hotel located in Denver, CO.

Chris shares his background and the synchronicities that led him to buying the Patterson Inn, cleverly located at 420 E 11th in Denver, Colorado. We learn more about the Patterson Inn and the rich history this space provides to the local community. Chris tells us more about 420 Hotels and the cannabis hospitality guests can expect from this consumption lounge. We also talk in depth about the legislative and regulatory hurdles Chris has had to go through over the years to make his dreams of a social consumption lounge a reality.

Through Chris’ diligence and perserverance The 420 Hotels and the Patterson Inn will be a one-of-a-kind consumption lounge in Denver, CO.

Stay tuned for the grand opening of the space!

If you are interested in learning more about The Patterson Inn and 420 Hotels give this episode a listen.

Chris Chiari is a driven entrepreneur with a wealth of experience in corporate strategy and film production. Skilled in marketing and messaging, he has engaged exclusively with the cannabis industry since 2011 and is a tireless advocate for cannabis policy reform and fostering industry growth.

Chris owns and operates Denver’s historic Patterson Inn, the keystone of The 420 Hotels portfolio. As 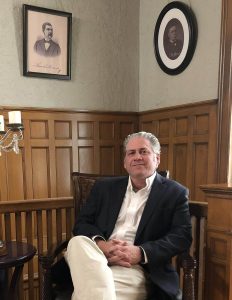 CEO, he uses his expertise in hospitality, operations and community outreach to address the stigmas and ignorance that still exist around cannabis use while creating a unique and upscale environment for cannabis consumption.

With a deep appreciation for the power of collaboration, Chris has built a wide-ranging network throughout his career spanning corporate boardrooms and the entertainment industry. His most recent film project, Public Enemy Number One, is a feature documentary about the War on Drugs, and counts entertainer Ice-T as one of its executive producers. The film won awards for Best Producer and Best Storyteller at its world premiere at DOC LA and Best Documentary at the 2020 Seattle Film Festival. It is currently available for rent on Amazon Prime and streaming on Pluto TV and Tubi. Chris has been on the Board of Directors for Colorado NORML since 2013 and serves as the organization’s deputy director. When not working on the 420 Hotels portfolio, Chris likes to stay involved with grassroots advocacy and advancing social reform; he was one of five original signers of Denver’s successful 2019 psilocybin ballot initiative. He also enjoys twiddle shows in his free time.